A few years ago, I started to notice that more and more young people were coming to my office with similar complaints. They all had neck pain, headaches, shoulder pain, and/or numbness and tingling into the upper extremity. While discussing my findings with one of these young patients, her mother asked me, "Well, what does she have?" I looked over at the patient and noticed that she was buried in her cell phone with her head flexed forward - texting. With that, I replied, "It's simple. She has text neck." I pointed out to the patient's mother that at 16 years old, her daughter had a reversed cervical curve with mild degenerative changes, and that she was too young to be experiencing these bony changes. I then asked the patient how often or how much she texts. She replied that she texts all day long, and that it is her primary mode of communication.

These days, people are constantly "connected" to their hand-held devices, whether it is their cellular phones, portable video games like Nintendo DS, e-readers such as Amazon Kindle, or they are just using apps on an iPhone. A Kaiser Family Foundation survey found that young people 8-18 years old spend in excess of seven-and-a-half hours a day using some form of mobile media. As a result, this younger demographic will surely be developing a condition known as forward head posture (FHP), which can cause the above symptoms and more.
As technology advances in the market of hand-held mobile devices, it's important to understand that where the head goes, the body will follow. If you have forward head posture, then you will have rolled shoulders. With rolled shoulders, a concave chest can follow, and often a pelvic tuck, all of which can contribute to progressive pain and dysfunction over time.

Text messaging was reported to have addictive tendencies in the Global Messaging Survey by Nokia in 2001, and was confirmed to be addictive in a study conducted at the Catholic University of Leuven in Belgium in 2004. Since then, a study at the University of Queensland in Australia has found that text messaging is the most addictive digital service. It has been compared to being as addictive as cigarette smoking. The text reception habit introduces a need to remain connected, called "reachability."

Because the demographic of people ages 13-27 is one of the largest groups of texters, we can expect to see a large increase of medical and chiropractic conditions within the next decade. The amount of time spent in a forward head tilt while texting or gaming, surfing or browsing the Web has increased as hand-held mobile devices such as cell phones, video games, and MP3 players have become smaller, mobile and essentially a direct extension of the person. Look around you and you will see people with FHP using hand-held mobile device at tables in restaurants, at red lights in their cars, walking through the mall, in line at the grocery store, and even sitting in doctors' reception areas. We are a society that is "connected," now more than ever before, and we are suffering the health consequences.

The problem is getting worse each year. According to data released Dec. 15, 2009, by the Census Bureau, Americans sent 110 billion text messages in December 2008. In the same month in 2007, Americans sent 48 billion messages. Amanda Lenhart, a senior research specialist for the Pew Internet and American Life Project, is not surprised that the trend is especially prevalent among teenagers. In a Los Angeles Times article (Dec. 16, 2009), she stated: "Teens are still developing their communication habits. Adults have preset ones already."

The world is becoming more mobile. Children are getting mobile phones at younger and younger ages due to affordable prices and parents wanting to stay in touch. Hand-held mobile devices are performing more daily functions and are more portable than ever. Google's vice president of engineering and mobile applications, Vic Gundotra, has noted: "We are seeing a very fundamental shift where increasingly, particularly among the young demographic and in Asian countries, the primary access to the Internet is not through the PC but through mobile devices."

The Problem's Not Going Away
Research performed by Informa Telecoms & Media reported that in 2008, almost 162 million smartphones were sold, surpassing laptop sales for the first time. The research also suggests that smartphone sales will continue to be immune to the global economic downturn. With technology advancing, sales of the hand-held mobile device staying strong and people's desire to stay connected, FHP will be more prevalent than ever.
Of course, forward head posture is not a new condition. Chiropractors have been treating and educating patients on the dangers of FHP for years, and the health conditions that FHP or anterior head carriage contribute to are well-researched and documented. [See "Fast Facts" table}

With all this said, it's important to understand the negative effects of a repetitive stress syndrome and appreciate how many hours you are using your hand-held mobile devices and how many hours your children are using these devices. Talk to your doctor about forward head posture, the dangers of text messaging and other behaviors that put your body in stressful positions, and how you can avoid the pain before it starts.
When Texting Turns Deadly 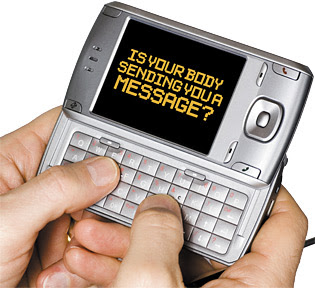 Can't stop texting? If forward head posture doesn't concern you (even though it should), the Federal Motor Carrier Safety Administration has found that of 17 activities that can drawn a driver's attention from the road, texting puts you at greatest risk for suffering a serious car crash. According to the National Safety Council, an estimated 28 percent of crashes (1.6 million annually) are attributable to talking and/or texting on cell phones while driving.
According to Dr. John Callaghan, president of the American Academy of Orthopedic Surgeons, "The problem with the use of 24/7 communications devices is that every driver believes he or she is immune to slip ups, but isn't. Orthopaedic surgeons want to prevent the pain and suffering associated with texting-and-driving accidents. To say this habit can be deadly is the truth; it is an outcome we unfortunately see every day."
Posted by The Back and Neck Pain Relief Doctor at 3:05 PM No comments: