Beating Breast Cancer One Step At A Time

October is breast cancer awareness month, so I wanted to focus on a subject that is close to my family since my wife is a breast cancer survivor.
There are many benefits to being active, but now women can prevent one of the most common cancers - breast cancer - by simply moving more. And, you'll be able to reduce your back and neck pain too at the same time!
The more physical a woman is and the more she incorporates activities such as walking, the more likely she will not develop breast cancer, according to two new studies.
In the first study, published online last week in Cancer Epidemiology, Biomarkers & Prevention, researchers with the Epidemiology Research Program at the American Cancer Society began by turning to a huge trove of data maintained by the cancer society. The database includes detailed health and medical information from more than 73,600 post-menopausal women, age 50 to 73, who enrolled in the study in the early 1990s. For almost two decades, they completed follow-up questionnaires every two years.
The questionnaires asked whether and how they exercised. About 9 percent reported never exercising. A few said that they exercised vigorously and often, typically by running, swimming or playing singles tennis. Most walked, usually at a pleasant pace of about 3 miles per hour. About half of the group reported that such strolling was their only form of exercise. Over the course of the study, 4,760 of the women enrolled developed breast cancer, according to the study.
The study found that those women who walked at least seven hours per week, usually distributed as an hour a day, had 14 percent less risk of developing breast cancer than those who walked for fewer than three hours per week, a significant reduction in risk. 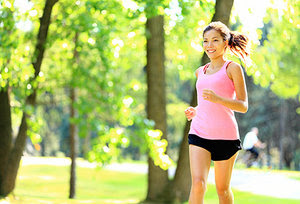 Meanwhile, those few women who were the most active, exercising up to 10 hours each week, had a 25 percent less risk of developing breast cancer than those women who exercised the least.
In another study published in Cancer Epidemiology, Biomarkers & Prevention, scientists from the School of Public Health at the University of Minnesota divided several hundred sedentary, pre-menopausal women into two groups. One group remained sedentary, while the other began a moderate aerobic exercise program that continued five times a week for 16 weeks.
At the start and end of the four months, the researchers collected urine and tested it for levels of estrogen and various estrogen metabolites, the substances that are formed when estrogen is broken down by the body. In this study, those volunteers who remained sedentary showed no changes in the ratios of their estrogen metabolites after four months. But, among the group that began exercising, the levels of one of the metabolites fell and another rose, shifting the ratio in ways that are believed to indicate less chance of breast cancer. The women also lost body fat and gained muscle.
If you are looking to get in shape and lower your risk of breast cancer put on your walking shoes.

Posted by The Back and Neck Pain Relief Doctor at 8:51 AM 1 comment:

No Shortage of Back Pain

Back pain, back pain, everywhere there's back pain. Back pain is second only to the common cold as the most frequent cause of sick leave, accounting for approximately 40% of all work absences. It's also the most common reason for filing workers' compensation claims (about 25% of all claims filed in the U.S.).

How bad is the situation? A study in the American Journal of Public Health analyzed data from a national health interview survey and found over 30,000 respondents who reported daily back pain of one week or more in the 12 months prior to the survey. From this data, the authors estimated that more than 22 million people suffer from back pain that lasts one week or more; these cases result in an estimated 149 million lost workdays.

These estimates didn't even include workers who reported back pain of less than one week, or who missed work for the entire study period! If you've managed to escape back pain to this point, it's probably just a matter of time until you're caught. But if you do get caught and need relief, feel free to call me to see what can be done.

Posted by The Back and Neck Pain Relief Doctor at 10:41 AM No comments: