Bed Rest for Your Back Pain? Not the Best Idea...

Upwards of 80 percent of adults suffer at least one episode of back pain in their lifetime, which means you've already felt the pain, are feeling it now or will feel it before you know it. And chances are good that, like so many others, your first thought will be to get off your feet, lie down and rest. Unfortunately, evidence suggests that unless the pain is severe or accompanied by other symptoms, such as pain radiating down the legs, rest is exactly the opposite strategy if you're trying to relieve your back pain.
If you're suffering from back pain, staying active is an important piece of advice to follow in the majority of cases. That means avoiding bed rest, prolonged stretches of sitting, standing or inactivity; and doing all the things you usually do, within reason (no heavy lifting or intense physical activity, including twisting or other dramatic movements that could make the pain worse).
While it may sound counterintuitive, abundant research suggests activity can help reduce the pain and shorten recovery time in most cases of noncomplicated back pain. In fact, one study that summarized findings from an international task force on back pain stated, among other findings / recommendations: 1) bed rest is contraindicated in subacute and chronic cases of low back pain; in acute cases, bed rest should neither be enforced nor prescribed; and if authorized (based on pain indication), bed rest should be for the shortest duration possible.

The theory is relatively simple, if you think about it: Inactivity can make your spine and back muscles tight and stiff, increasing the pain, particularly when you bend or stretch. Prolonged inactivity can also make you weaker, not to mention that evidence suggests the longer you stay in bed with pain, the more likely that your pain will become chronic / more disabling, often because you avoid moving for fear it will exacerbate the pain.
Of course, the first step when suffering back pain is to make a visit with a health care provider who can evaluate your pain, make sure there's nothing more serious going on, and then offer treatment and self-care recommendations (including activity) to help relieve it. Enter your doctor of chiropractic, the experts in treating spinal pain.
Posted by The Back and Neck Pain Relief Doctor at 9:55 AM 1 comment:

Another Reason To Avoid Epidural Injections

Another Reason to Avoid Epidural Steroids

While the uproar surrounding tainted steroid injections causing fungal meningitis has left the mainstream news after months on the front pages, hundreds of reported illnesses and far too many deaths, it's high time for a reminder of why epidural steroids – tainted or not – shouldn't be so commonly prescribed for back pain. According to a study in the research journal Spine, which compared spine patients who received epidural injections to patients who did not receive injections, steroids "were associated with significantly less improvement at 4 years among all patients with spinal stenosis."
In other words, patients who received the injections were in worse shape after four years than patients who did not receive injections – regardless of whether either type of patient ultimately underwent surgery to "relieve" their pain. Not exactly an endorsement of epidural steroid injections or surgery. What's more, patients in both groups had similar initial symptoms / pain scores, dispelling the notion that patients who received injections had worse initial pain or a worse condition than non-injected patients.

Spinal stenosis is a narrowing of the open spaces in the spine. As you might expect, this can put pressure on the spinal cord and nerves, leading to neck or back pain. It is most commonly caused by wear and tear over time, which puts you at higher risk as you get older (particularly over age 50 or so).
Spinal stenosis and other conditions that cause back pain and related symptoms often don't require medication, injections or surgery. Your doctor of chiropractic is an ideal health care provider to visit first if you're suffering from back pain, particularly since research suggests your odds of undergoing spine surgery are much lower if your initial health care provider is a chiropractor versus a spine surgeon.
Posted by The Back and Neck Pain Relief Doctor at 11:07 AM No comments: 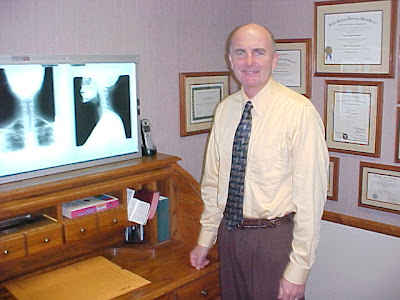 "The Back and Neck Pain Relief Doctor" 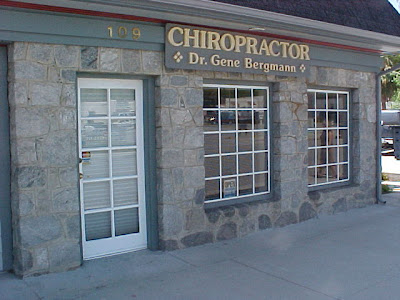 Posted by The Back and Neck Pain Relief Doctor at 2:12 PM No comments:

Why We Are Fat, and What Can Be Done About It


You know you've done it — seen someone morbidly obese and thought to yourself, "Why couldn't they just control themselves?" or stood in the supermarket, comparing people's carts to how they look, or any other myriad of judgments we have when we see someone who is overweight. Many of us have this overly simplified view that it's just a matter of exercising more and eating less, that it's the First Law of Thermodynamics with it's "calories-in-calories-out" model. I'm here to tell you that you couldn't be more wrong.
"But it's the fault of the fast food restaurants!" people cry out. Soda! Larger portions! High fructose corn syrup! Yes, that's all true. It's also because we spend more time in front of computers with less exercise, we eat out more, and we eat more processed food, right? There are a lot of reasons, and many of them are reasonably accurate. But there's a bit more to the picture than you realize.
Let's start with some basics, and ones that are irreconcilable truths. The first one is, our systems are designed for times of feasting and times of starvation. There is no getting around that. Remove those periods of starvation, and our systems start to break down with the caloric overload. And once our systems are broken, it can be nearly impossible to get them completely "fixed". The other fact is that there are a lot of weird "things" in our environment nowadays that our system doesn't know how to handle, and those molecules are causing changes from the genetic level on up (that's what the study of epigenetics looks at — the impact of "foreign" molecules on cellular processes). Bring those two pieces together and we have a virtual tidal wave of obesity, and no way to turn it around.